Meh. I'm watching the game tonight and it's going okay. I turned it on in the 3rd period.. and what do you know, MacArthur scored, he's on my fantasy team and he's on the bench. WHOOPS!

I don't have a bunch to talk about.

It's overtime. Eww the Cros hit the puck with a stick higher than the crossbar.. this better not count!

The ref said it didn't hit Crosby's stick when it clearly did. WHAT THE HELL?

Oh that is bullshit. He actually says "The puck did not hit the high stick." So you admit that the stick was high.. and frankly, it actually DID hit the stick.

I am peeved big time right now. I can't imagine how Lindy feels.

"Sidney Crosby was very involved in this game." He had ONE goal. (and it shouldn't have counted.) Ha they are interviewing him and he says "it may have been above the crossbar but I got lucky." OBVIOUSLY even Sid knows that his stick was high or he wouldn't have said that.

So to end this rude post, I shall share something fun. A pic of Heather, Kate and myself from Wednesday night. :) 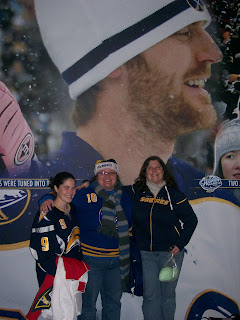 I so love the background for the group photo. Absolutely LOVE IT!!!

Still a good present, though.

thanks for the compliments on the pic, it was fun. I thought it only appropriate that we should take it in front of Hank since Heather B was involved.. ;)

Yeah, standing in front of Hank was not my idea! (Though I certainly didn't protest :))