With the NHL feeling like it's on (semi) permanent hiatus, I have to look elsewhere for my hockey fix. And 2 weekends ago, I found it. In spades.

It was what I was calling "An Epic Hockey Weekend" in 3 parts. 3 hockey games, 3 different levels of competition, 3 cities, 3 nights, 3 different sets of people I was viewing with. And each one was fantastic.

And none of them were the NHL (well Sunday sort of was, but not really.)

Friday:
I had some free tickets to the Canisius/Robert Morris hockey game that night. it's D-I hockey. Small school, but still D-I and still funtimes. I decided to take the little nephews- but it was a surprise. They know there's no NHL hockey and I didn't tell them where we were going, only that it was in Buffalo. So they started guessing.. a concert? A baseball game? (even though it's November. They're kids!) A museum? A play? They did guess hockey but even then they weren't sure.

So when we arrived, they were happy. It wasn't too busy so we went right down to the front row to be right on the action. :) Good choice. Canisius lost 4-0 but the game was closer than you'd think by the score. There was a nice bit of hitting and some pretty fast-paced action. All in all, a good night at the rink. The kiddos enjoyed themselves. They stood right on the glass for the 3rd period, and every time a player would run into the glass close, Benjamin (the 6 yr old) would turn to me with a HUGE grin and say "SAM! Did you SEE that?!" It was precious and totally made the night. :)

Saturday it was off to Erie to connect with some of my CBJ tweeps and peeps to see some CBJ prospects Oskar Dansk (Erie Otters) and Boone Jenner (Oshawa Generals). I knew nothing about either team and hadn't heard of most of their players but it didn't matter. It was hockey. And it was OHL hockey, a new experience for me! WOOHOO! We had super fun. I got to see my bf Cyrus and my bff Dannie and several other friends. We even made it to the CBJ website- http://bluejackets.nhl.com/club/blogpost.htm?id=12073 I would totally go to Erie for another game. The fans were loud and fun (it helped that the Otters scored 5 goals) and the tickets were cheap. Good place for hockey. :)

Sunday was PAVEL BURE DAY. I had been waiting for this day since I heard Pavel was going to be inducted into the HHOF. I bought the tickets to the Legends game back in September. Finally I was getting to see Pavel play hockey again. Nothing short of death was going to stop me *(and luckily, I didn't catch the plague until AFTER my epic hockey weekend)* I could hardly sleep the night before from anticipation. My friend Eric came over and we left at 8am sharp. (I haven't found it that easy to wake up at 7:15 in a LONG time!) The drive to Toronto was super smooth- border crossing was fast, there was no traffic, it was brilliant. We parked and had lunch at Gretzky's- it seemed appropriate for the Epic Hockey Weekend, and Eric had never been. The food was tasty and the atmosphere there is fun.

Then we wandered to the ACC for the game! I was getting a little giddy.. I was kinda bouncy. We couldn't go down to watch warmups and it was open seating (except for the first 8 rows) so we found a spot 20 rows up or so in front of the stairs so there was no one in front of us. It was a nice vantage point. The game was cool. There were NHL Alumni from all different teams on "Team Trottier" and then Leafs Alumni on "Team Gilmour". We got to see Dino Ciccarlli, Theo Fleury, Paul Coffey, Doug Gilmour, Wendel Clark, Trevor Kidd, Curtis Joseph and others. It was pretty fantastic all around.

And then of course they got to the presentation. Pavel was first. I almost cried when they did his intro.. but I manged to turn it into a scream instead. ;) There were several Bure fans in attendance. I chatted with a few guys with Canucks jerseys on. :) He got his jacket and watch. Then they did Adam Oats, Joe Sakic and Mats Sundin (all totally legit players who I could cheer for... even Suckic- he's legit, just played for the wrong team LOL) so that was spiffy. Of course being in Toronto, the peeps went nuts over Sundin. That was cool. He's really tall.

Then they started the game. The honorees had to get changed so they didn't start. But it was a fun game- they kept the clock running and did random announcing/interviewing during the whole thing. It's hard to explain but it worked. Finally, about halfway through, the honorees got to take the ice. Pavel was a little slow at first.. like he was getting back into it. He had a couple of chances right off but nothing happened.

But in the 2nd half (yeah they did 2 halves, instead of 3 periods), things got fun. Pavel seemed to get his groove back. He had a few really good chances and started to look better. He got an assist on a goal (and I got it on tape!) and then scored 2 more! I videoed a lot of his shifts. It's not the best quality, but it's PAVEL. BURE. SKATING. which is something I will probably not ever see again. And it was amazing. I feel like words can't actually describe it. I never got to see him win a Stanley Cup but I have seen him play a few times, and I got to see it again. Even if it was a fun game, it was still the best skater I've ever seen. And he was clearly having fun. He was taking super long shifts- like he didn't want to leave the ice ever!

It was a glorious day. He was incredible. Theo Fleury was really funny and the other players too- they were all having a grand time playing in this game. They had some 5 and 6 yr olds come out for a while and they played with the kids too. it was pretty adorable.

All in all it was a fantastic hockey-filled weekend. I got to see lots of different hockey and hockey fans and spend time with wonderful people doing something that I love- watching hockey.It was more of an effort than turning on the tv to MSG and catching a Sabres game, but it was well worth the time. Hockey is always worth it.

In closing, here is a pic that I think sums up the joy of the game. Noses pressed to the glass, not wanting to miss a second of the action. That's what being a hockey fan is about. Not revenue and collective bargaining agreements and players' associations. Ice, and puck and flying bodies and goals. And love. 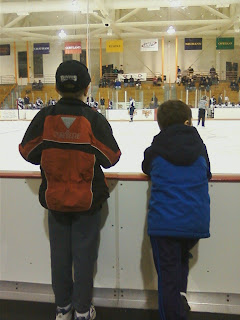 We are closed for the season

WTF- NHL? Seriously guys.. did you just cancel the Winter Classic? Might as well say the season's over and leave us in peace rather than stringing it along for the poor unsuspecting optimistic fools among us. (which might sometimes include me, though my optimism about an NHL season is waning by the day.)

Egads, if I could care about another sport, I would. I would drop the NHL like a bad habit and peace it to something else that would be less likely to hurt me every 7 years or so.

But I can't. Like I said in the last post, they are forcing me to break my hockey habit, but I don't want to.

Obviously I still love the game (well maybe it's not obvious, but I do love hockey in all forms), but the NHL was the easiest one to consume on a regular basis. There's a decent bit of college hockey in the Buffalo area (we have Niagara, Canisius and Buffalo State) and the Amerks aren't terribly far away either. BUT I don't live *in* Buffalo, I live an hour away. And the Sabres were on tv.. so it was an easy way to get a hockey fix several nights a week, with a few live games thrown in along the way. I don't have that anymore.

I will probably take the nephews to a Canisius or a Niagara game at some point this season. We used to go to at least one NU game a year after I stopped working for them and this year we have free tix to Canisius through work. But if we don't have NHL hockey back, there will be no road trip to Columbus to spend the weekend with my sis Brett, as we have for the past 3 years. The kids look forward to that "Weekend at Brettie's house" all year. My 8-yr old nephew has declared himself a Blue Jackets fan based on those 3 games- completely notwithstanding the Sabres and Purple Eagles games I've taken him to- Brettie took him to 3 CBJ games and he's a fan for life now. (true stories)

I've been having a hard time explaining the lockout and billionaires fighting over billions of dollars to a 6 year old and 8 year old because it doesn't make much sense to this 31 year old. Yeah, I've read about the union and revenue sharing and all that but it's still bullshit and I'm sick of it. (and 57% or 53% or 47% of $0 is still $0 just sayin.)

Give me back my hockey.

With the cancellation of the Winter Classic, it doesn't look likely.

Now we just have to wait for the announcement.
Posted by S.A.M. at 1:16 PM No comments: