HAPPY BIRTHDAY to my One True Hockey Love, Pavel Bure!

The Russian Rocket turns 39 today. He's been out of hockey (officially) since 2004, but hasn't played a game since the 02-03 season. If not for the recurring injuries, he could possibly still be playing today. I miss seeing him on the ice. He was one of the reasons I started watching hockey, and THE reason that I continued.. and for that I will always love him. Besides that, I have yet to see anyone who can skate- and not just skate, but stick-and-puck-handle, WHILE skating at top speed, like he can. He made goalies and defencemen look silly almost every night.

Poor guy never won a Cup (though he came about as close as you can get in 1994) and never really played on a contender (aside from that Cinderella year, the Canucks were pretty bad and the Panthers even worse). He never played with a top centerman (which could have made a difference) and even still, he finished his career with 779Points in 702 NHL games, which is good for 1.10 points per game, and 437 G which is .62 goals per game. Not too shabby. (and playoff-wise, he had 70 pts in 65 games- 35G 35A, also not bad)

To compare a bit with today's top Russian player, Ovie has 265 G in 390 games, which is good for .67 goals per game, and he scores 1.33 points per game but he's played on better teams--and with better centermen (no offence to Trevor Linden) than Pavel did. You can't really compare much more because they are such different players, style-wise. Ovie is more like a Fedorov- a power forward, where as Bure was a sniper and really too small to be a "power forward".

Enough comparisons, Pavel Bure was and always will be my favorite hockey player of all time. Say what you want to about him, but he was super exciting and could (and usually did) make magical things happen when he was on the ice. I think if he had ever won a Stanley Cup, then he would have been inducted into the Hockey Hall of Fame in 2008, when he was eligible. I think I wrote about that here, so I won't bore you again, but I think it was outrageous that he wasn't inducted, when they only picked 2 players out of 4 spots that year. B.S.
Posted by S.A.M. at 1:22 PM No comments:

About that time, eh chap?

Wow I have been a super slacker as far as my little blog goes. Many apologizes to my (one) faithful reader(s).. I have been busy-- going to hockey games!

Okay well not that busy I guess. I have only been to 3 games since my last post and it's been something like 3 weeks so that's really no excuse. I'm just lame. I will try to be better, and I'm sure the advent of the playoffs and hockeyeverynight!, I will be posting more. :)

So let me tell you where I've been. I went to the Sabres/Caps game on the 3rd and it was strugglin. Not the worst game I've seen but certainly not the best. The company was good so I guess that was something, and I did get to see that slammin hit that Kaleta had on Ovie as it happened.. but yeah, rough night for the boys in Blue.

The Sabres seem to have many nights like that lately. Ah well, it happens. We should still at least make the playoffs and that is a VERY GOOD thing. I just hope they keep it together enough to make a decent run into the playoffs instead of limping in. But there is still some hockey to be played before we can discuss that in earnest so I'll leave it there for now.

Moving on, time to tell you about my hockey pilgrimage to "The Rawk", as my friends the The Ookies often refer to the Prudential Center in NJ. I left last Friday from Buffalo on the train. (love me some Amtrak, no security lines, no getting there a thousand hours early, NO MOTIONSICKNESS! soooo much better than flying, imho) and hit Newark at about 5:30. I met up with my sis, who had flown in from Louisiana and we walked from our hotel to the Arena. It's a REALLY nice place. All Devils, all the time. The Stanley Cup banners- 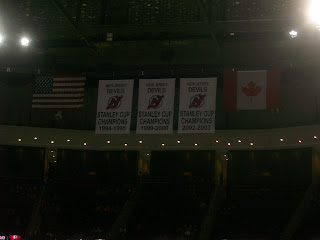 are awesome, of course, and there is lots of Devils-themed artwork and stuff all around the place. The score- (3-1) Devils over the Penguins- was the best part! 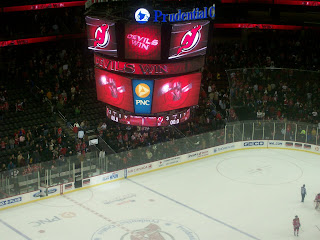 The game was great fun. If you ever go to NJ, get your tickets up in section 208/209, the ppl there are GREAT! They were loud and rowdy, I felt like I was at some crazy minor-league game. They were chanting all night (and even let me start some Let's Go Devils!-- I was a little scared to do it since I wasn't a regular, but they seemed to think it was cool. yay me!)

Proof of attendance- like my Devil horns? They light up! :) 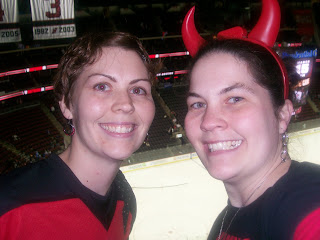 And then on Saturday, we ventured onto Long Island for a Devils/Isles game. We figured since we were that close.. we'd probably never get a better chance to go there.. and who knows how much longer the Islanders will be around (sadly).. and they were playing the Devils so it was all good.

Their arena is SMALL! I felt like it was a minor league rink. And the parking (right next to the place) was only $7!!! What a deal. :) We sat up in the 300 level but it felt so close, compared to any other rink I've been to. Wild. There were lots of Devils fans and we got some serious cheering going on, but it wasn't working for the boys, since they lost. The defence wasn't so great, and Marty was sitting this one out. The Islanders were just the better team, but we had a great time. The guy sitting next to me was exactly the kind of person I was expecting to see at an Islanders game. He was a lot of fun to talk to. :) 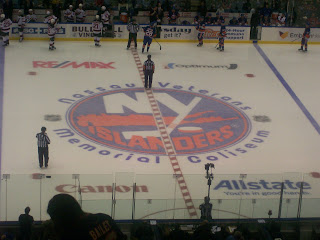 -Center Ice before the game-- it feels so close, even though we're like 6 rows from the top.. 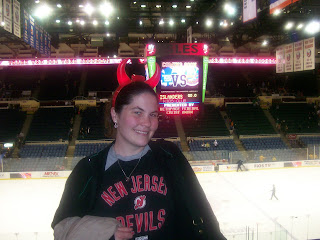 -Proof of attendance. Note the Devil horns again- I actually bought them with intent to wear them on Saturday- hehehe.. got lots of comments, most of them good, even from NYI fans. :) Also note the Stanley Cup banners off to the right. As bad as the Isles are at the moment, they have some decent history.

The full album can be seen on Facebook-- if you're so inclined.. **or will be eventually if I can ever get them to upload!**(I think you have to be my friend to see them, but please, if we aren't yet friends on facebook, feel free to change that!!) :)

I am still so emotionally wrung out from the Olympics.. man that was fun all around. (except for the end result of the hockey.. that wasn't so fun but it was still great!)

But now our NHL hockey is back. I didn't watch last night's game- was at a girly party but I caught the last 5 mins in the car on the way home. Roy seemed like he was pretty feisty last night. Is it the return of the 'old' Derek? One can only hope.

Today is trade deadline day.. *cue scary music* what will the end result be? Will the Sabres be buyers or sellers? If past experience is any indication, any trades the Sabres make will be light but I guess we'll see. I've got the page up and on refresh to keep up on the latest. So far it's been pretty slow..

I found this amusing article about how Sid's gear has gone missing.. again Seriously, is there a black market for Crosby-used gear? When it's something so major as that game, there's no way you can sell that and not get noticed. Weird. I'd feel bad for him but I don't. I just think it's kinda funny.

I'll be at tonight's game to see the new-look? (or exactly the same) Sabres in action. Should be fun. Our last home game against the Caps was a thrilling 3-0 owning back in December and I was there too. That game rocked and I hope we can do more of that tonight.