I am highly enamored of Steve Montador and his eyebrows. LOOOVE the new Green Team commercial. I wish I could find it online. (we're going to ignore the fact that Monty has a dreaded neck beard going on there.. LOL)

I love how belligerent Mike Weber is. He's so fun. They could all use a dose of that fire. :)

I'm sort of watching the game but not paying quite enough attention to it to properly comment.

Why has Derek Roy forgotten how to play hockey? It's been ages since his last goal...

I've been hinting at this post for a few days now, so I guess it's time I just sat down and wrote it. So what do I really want to say? I said the other night that hockey is "home" to me. That's true, and has been true for over 16 years now. It was nothing something that was born and bred in me, it was something I discovered on my own (with a little help from my sis, Lance Links, and Pavel Bure) and felt a deep connection to. I think I've told those stories before, but become a hockey fan was, for me at least, a conscious choice that I had to cultivate once the idea was planted.

I've been through some times as a hockey fan. I've seen my teams win it and lose it in the first round of the playoffs, game 7 of the finals, not even make the playoffs.. I've been around and changed teams a few times and found some new players to cheer for (though Bure will always be my #1 no matter what) but it all started with the 1994 Vancouver Canucks. They were my first team.. and they will forever be special. I could probably still name every player from that team (or at least come pretty darn close). I still have some of the 1994 playoff games (including dreaded game 7 which I have never watched) on tape. They were MY boys and they will always be MY boys.

My parents found one.. they had to go to Cincinnati (an hour away) to get it but they found one. I loved that jersey. I probably wore it once a week on average for 3 or 4 years. No lie. I now own 10 hockey jerseys but that was my first and for a long time, my favorite. Longtime readers may recall This photo, which was one of my senior pics. I loved hockey and I loved the Canucks.

My first NHL game was a Vancouver Canucks vs. Detroit Red Wings game at Joe Louis Arena on March 17, 1995. I wore my jersey and bought a hat and cheered my heart out for the Canucks (one of about 3 people in the arena who was). One of the best nights of my life.

Over time, when Pavel was traded to the Panthers in 1999, I moved my allegiance. (it is interesting to note that Pavel Bure and Bret Hedican were the last 2 members of the 1994 team to leave Vancouver.) I left with them but a part of my heart will always belong to Vancouver.

Over the past several seasons, I have paid more attention to the Canucks. They are a fun, young team. They also have some incredibly good looking fellas on their squad. They score a lot of goals and have a great stopper in Luongo. But, since they're in the Western edge of the Western Conference, I barely see them anymore. So when I saw they were on the Sabres' schedule this season, and my brother-in-law has season tickets, I grabbed that game. I wanted to see the Canucks again, after 15 and a half years.

I'm not going to lie, the game brought back a lot of emotions for me. I felt like I should be cheering for Vancouver. I enjoy the Canucks, but it's more of a passive enjoyment, and I would never pick them over my Sabres. There were lots of Canucks fans at the game, and they were wearing all different styles of jerseys. I saw 3 people with Pavel Bure jerseys (one of them was the 1994 SCF jersey- and I could tell that from the other side of the arena. True stories, but really, are you surprised? It's me!) There were many people with the blue, silver, maroon and black with the Orca "C" on them- I remember when they debuted those jerseys.. we found some pics online (this was early internet days) and I printed them out. I wanted one of those jerseys but never got one before Bure was traded (I eventually got a Panthers one, though.)

It's hard to describe the feelings I had on Monday. I've tried to break it down into words, but there aren't really words. It was odd.. but comforting at the same time. It's like coming full circle as a hockey fan. It was facing my first favorite team while cheering for my current favorite team and it didn't feel awkward and nasty, it felt good. It felt safe. It felt like no matter what I picked, I'd be okay. It felt like home. I keep going back to that, but it's true. Hockey is home. Old team, new team, home is home.


And I absolutely adore the current Canucks uniforms. The colors are gorgeous and I want to own one right now.
Posted by S.A.M. at 11:55 PM No comments:

I still have that post wherein I wax poetic about the Canucks and hockey and rah rah rah memories... but it's still stuck in my head.

However, it is Wednesday, and that sometimes means that I provide you with a hockey SAB. Tonight, I have one that I noticed at the game on Monday. 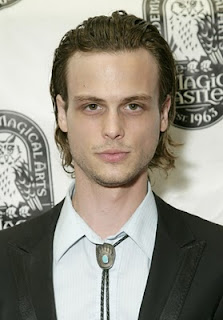 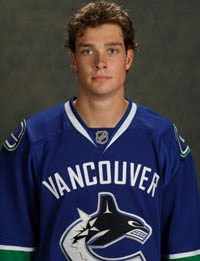 Hellooooo Ryan Kesler. I'm down with that.

and our little Roy boy is growing up. . Nice article, Jerry Sullivan. :) I really liked this quote: ""I want to be an elite player in this league," Roy said. "I don't want to cruise through my career and just get 60, 70 points or whatever. I think that's a part of being a human being and growing up. Whatever you do in life, you want to be skilled at it. You want to be the best. I'm trying to approach it that way every day."

Let's hope he continues this growing up process. 21 pts in 20 games is not a bad way to start. Good on ya, Royzie. :)

I have some rambling memory and nostalgia-inducing thoughts from last night's game, but they aren't quite in coherent form yet. Expect that braindump post soonish (if anyone still reads this drivel).

The game last night was a superbly awesome time. The action was good, the crowd was fun, OT was out of this world.. just a fantastic night all around. I was really stressed before the game because I have a lot going on right now and I felt bad to be taking the time to go.. yet this game was on my radar since July, when the schedule came out- and I really felt like I *needed* to go. I'm so glad I did. It brought up a lot of emotions (back to that not-yet-written post) and was just a heck of a game. Besides, I like going to Sabres games. Hockey has always felt like 'home', and I've been missing it a lot lately. It's never too late to go home, and last night was a much-needed reminder of that.

Now I'm getting rambly (which isn't technically a word, but you know what I mean, right?) and that means it's time for bed. G'night friends!
Posted by S.A.M. at 12:17 AM No comments:

Labels: canucks, cheating on the sabres, derek roy, I was there, ryan kesler

I feel that I should give Royzie some love here. He's been the only consistent Sabre on the roster this year, and with 19pts (8 goals) in 18 games, not only is he heads and tails above the rest of his team (ya bunch of slackers), but he is 8th in League scoring. Sounds good to me.

Perhaps, more importantly, he has played hard all season, something that cannot be said for all members of the Sabres. I LIKE that. That is why I started to like Derek Roy in the first place. I remember when he was first getting call-ups from Rochester back in 2003-04.. I vividly remember driving home one night after working a Niagara game and hearing RJ go on about how solid and tough and scrappy this kid was. And I liked him instantly. Then he started playing for the Sabres full-time and got a little lazy and people started hatin on him but I knew he could still be sweet- when he wanted to..

Yeah yeah you've heard it all here before. I just wanted to re-iterate that I have loved Royzie for a long time now and I never really gave up on him. I may have kicked him out a few times and threatened to change the locks on him, and occasionally cheat on him with Patrick Sharp or Steve Montador, but when the day is done, he's still my boy.

So I say, good on ya, Royzie. Keep it up, boyo. The Sabres NEED you and I like the fact that the player that I like most is playing like we all know he can. :) And if the rest of those hosers can get on it, we'd be in better shape.

Yup. That's all I've got. I haven't actually watched a Sabres game since..... October 16 I think. That's kind of pathetic but life has been on fast-forward for a while now. I'm GOING to the game tomorrow- (I have a few reasons to be excited about this, not the least of which is Mr. Ryan Kesler) and the simple fact that I will be able to watch hockey is brilliant all on its own. YAY!
Posted by S.A.M. at 9:47 PM No comments:

My blog has been quiet lately.

I will make no excuses- I should be able to talk about hockey, even if it's bad hockey.. but I have been so swamped with work and play practice and so uninspired by the Sabres that I find I have very little to say.

So there it is.. maybe I'll start babbling about hockey again. I've dealt with terrible teams before. (I haven't been a Sabres fan for all that long, but I was a Canucks fan in the 90s and then went on the Florida Panthers so I know about strugglin hockey.)

I do still think about hockey and if I ever get some nice spare time again, maybe I'll feel like writing. Till then I will keep reading and keeping an eye out for those separated at Births..
Posted by S.A.M. at 10:36 PM No comments: