Can you smell that smell?

I'm ready. It's been a really long offseason without even the gift of a team that I enjoy winning the Cup this year. Blah blah.. but on Saturday, the Sabres get to start all over again!

I've got all sorts of frippery floating around in my head, like some start-of-season rituals I used to have such as wearing a jersey to school on opening day (no matter how hot it was outside, and we had some really warm days LOL) or poring over schedules and opening night rosters until I had them memorized.. but this year is much calmer. I may wear my Devils shirt tomorrow for the heck of it, and I did read some predictions in The Hockey News from a few weeks ago (I've got 2 back issues I need to catch up on) but it will be low key. I may be at Saturday's game, and if I'm not actually there, then you know I'll be watching. WOOOHOO! Real, live hockey is (almost) back!

HE MADE IT! Tyler Sloan is on the opening night roster for the Capitals!
Article Here

I particularly liked this quote from Boudreau:
On Sloan over Alzner:
"Tyler Sloan was our best defenseman in camp, so what kind of reward or justice would that have been to send him down today. We had nine, and it was really hard to send Karl down, because he played really well, too. At this stage, he was the easiest guy to send down. As reasonings go, and this is what I told Karl, sometimes the salary cap hurts you, sometimes it helps you. And in this case, it hurt us."

*The Sabres closed out their pre-season with a 7-6 win over the Leafs. So far scoring has not been a problem in the preseason and we've seen some cool stuff. I hope they take the "complete game" thing to heart. We'll see on FRIDAY! It's almost here..

*He's at it again:
"Road" trippin with Patrick Sharp . He's so silly.

*Sloaner is still with the Caps. They have 7 d-men from last year and he and Alzner are the 2 new guys trying to crack the lineup. He had an assist today and was a +2 for the game.. not too shabby. He's been playing really well and he would have to clear waivers to be sent back to the AHL so that is actually something in his favor, because they don't want to lose him.. so he could actually start with the Caps. WOOOO! :)

I know a few of you read this..

What are you waiting for?

Come play fantasy hockey with meeeee...
it's free and fun to play. No experience necessary. http://hockey.fantasysports.yahoo.com/hockey/
League ID is 167605 and the password is steviey to join. :)

Even if you're already in another league (or 2, like me) you can still be part of the fun.

And Coach Boudreau had this to say about him:
*Tyler Sloan also received some praise from Boudreau. The defenseman was solid all night and blocked four shots. "He certainly played good," Boudreau said. "I thought he was as good as we had."

while we're at it

Who wants to play fantasy hockey?

I made a league of my own this year.. (in addition to the 2 I played in last year.. LOL)
if you want to join, here is the link:
http://hockey.fantasysports.yahoo.com/hockey/register/joinleague

Select the join custom league button:
The league ID is 167605 and the password is steviey. There are 12 spots available, so jump on it! :)

The end of the beginning

Farewell to Bret Hedican, one of the last guys from the old 93-94 Canucks (my first favorite hockey team) to call it quits. He was also the last guy (along with Pavel Bure) to be traded from that team. (Linden came back, but that doesn't count) I always liked Hedican, he was a solid, underrated, stay at home defenceman who just got the job done. :)

He was about the only reason I was happy to see the 'Canes win the Cup in 06 after they beat the Sabres. It was good for him, one of those guys who never got a lot of attention, but was solid and steady, to get a moment to shine. :)

I met him briefly once, during a Panthers/Blue Jackets exhibiton in Cincinnati. He and several other big name Panthers were sitting out (Ray Whitney, Scott Mellanby, Trevor Kidd and Vicktor Kozlov were the others) and I found them up in the stands and asked for autographs. They were all quite kind and hooked me up. :) Hedican was friendly, even.

He will be missed from hockey, but I'm sure he'll be happy whatever he does.
Posted by S.A.M. at 1:29 PM No comments:

Almost but not quite

So... I acutally watched most of the Bills game tonight. I still don't really care about football, but occasionally it can be decent. My sis is visiting and she likes football so it was on and I was being social. (and really, I should be a football fan by default. My parents and sibs (minus Quin, who doesnt really care about sports at all) love football, as does most of my extended fam.) But I just haven't felt the draw to football that I have towards hockey.

However, I found myself actually caring about what happened to the Bills tonight. It was somewhat interesting. Painful, as the Bills are wont to be, but interesting. They seemed to be making such a huge deal about how heartbreaking it was, but let's be honest with ourselves- it's THE BILLS. This is how they roll. They make you think that this time they'll really do it. They have a few great drives, make a statement, then forget how to play football for 3 minutes and then it's over. Just like our beloved Sabres. It is BUFFALO. It happens. We should be used to it now. It's really probably more of a surprise when they manage to win.

So with that in mind, it was still sad that they couldn't get it done. There were some very good things about tonight, but I won't pretend to know enough about football to talk about them. I have a basic understanding of the game, and can usually tell if something is good or bad, but the nuances are somewhat lost on me because I don't care enough to learn.

So, I will say some things of a completely superficial nature:
-I liked the Patriots throwback uniforms a lot better than their usual ones.
- The referee uniforms are a bit much though. LOL
-Could the announcers please let go of Tom Brady's junk? They were up in his piece all damn night and I was so grossed out of it. Please NOTE: Tom Brady is NOT the only athlete to ever have major knee surgery. Get. Over. It.
-Moving on.. Trent Edwards is cute and so clean-cut looking. I have no idea if he's a decent person, or if he even has any personality, but I'm okay with him being a "face" of my city.
-Ditto that for Paul Pozluszny- he's just awesome. But he seriously needs a haircut.
-I hate the "crunch" of football players colliding. For some reason, the sound of hockey players crashing into one another doesn't bother me. It's similar but not the same and the football sound is so much more cringe-inducing for some reason.

That's all of the non-hockey observations I have for now.

Hockey in 3 days!!! perhaps I shall write a happy it's almost hockey time post soon but it's not ready yet. My brother in law has season tickets and he got them today. WOOO! :) They look really cool. I was excited to see that the Devils, Caps and Blackhawks all come to visit on the same week in December. That will be an interesting week for teams that I like other than the Sabres. Maybe I'll get to see a few- probably the Devs at least. I'd really like to see the Patrick Sharp- er I mean Blackhawks.. but we'll see what happens.
Posted by S.A.M. at 10:23 PM No comments:

I know that I missed it but this is too good

I've been massively slacking on the Hockey SABs lately (and it's Thursday, not Wednesday) , but with no actual hockey to watch, it becomes difficult to find them sometimes. However, yesterday when Anne listed her Western Conference Boyfriends for the year, I was struck by one photo in particular.

You can tell me what you think- it may just be the superficial "crusty old man" look that they have going on, but there is a definite resemblance here.

Without further ado, I give you.. 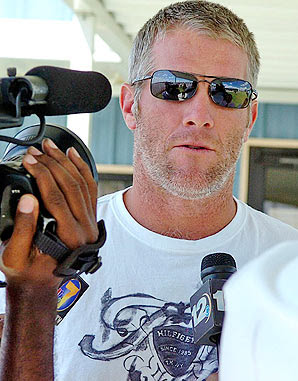 -Everyone's favorite "Is he retired or not?" Contestant, Brett (I-cant-say-my-name-right: it should be Fah-Vray, not Farrrrve, but I digress) Favre

-The crustiest of the old crusties still in the NHL (minus, perhaps Rod the Bod Brind'Amour, if he's still kickin) Owen Nolan

I'm feelin it. Separated at Birth? You be the judge.

I may write up a preview or something soonish, or I may not. I won't be at PuckDrop oon Saturday as I have callbacks for a play I just auditioned for but it is all good because ONE WEEK from now I will have seen the first Sabres hockey of the year. (and Tyler Sloan too, if I'm lucky)

I have tickets to the Sabres/Caps game in 2 weeks! :)

And I expect that my boy Sloaner will be playing for the Caps- they signed him to a 1 year, 2-way deal last year. I just read they re-signed him-- and since he played 26 games in the reg season last year(and 2 playoffs!), (and was pretty decentI imagine they'll give him a good look in the preseason.

So that being said, I need to think up a sign to make for that game, so I can catch his attention! I will wear his jersey of course- but I want him to notice me. (and then I can freak him out because the last time he saw me I was in Salt Lake City, LOL) I may try to go to practice that day- dunno if the pre-season practices are open to the public or not, esp. when it's the other team, but it's worth investigating non? And I really do know him, I'm not making that up. ;)

I found some great articles about his NHL playoff debut- which can be viewed here and here if you are interested.